“Timely and sympathetic… gasps and laughter from a recent audience showed that its subject hits home.”

“A vital piece of theatre… this show masterfully blends the political with the personal to make the characters’ emotional stakes feel real.”

“Alexander’s writing is so good.”

“A don’t-miss opportunity for New Orleanians.”

“Lively… thought-provoking…it would be wonderful if ‘Brothers from the Bottom’ makes it to the Great White Way. Broadway could use some color of this magnitude.”

Brothers From The Bottom

Four years after Hurricane Katrina, Trey Simms arrives in his childhood home of New Orleans; a place he vowed never to return.  His arrival is met with enthusiasm by all except his brother, Chris, who is suspicious of Trey’s claim that he has returned to work at revitalizing the city. A chess game ensues between the two brothers, as they battle over a proposed real estate project. In the end, gentrification threatens the fabric of their New Orleans neighborhood, and the bond between brothers. 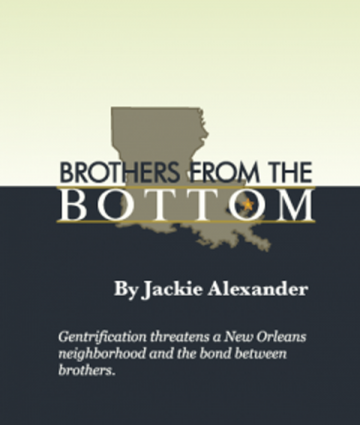